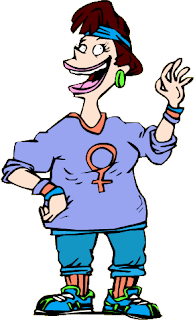 
This week, the Badland Girls discuss general internet stuff, including homophobia in comic fandom, race and television, bath salts, gay ponies, and death. Destiny comes out as an Agnostic, and Rhea learns something new about Lee Terry. We also read a fan email and plug the shit out of our recent appearance on Pool Party Radio (poolpartyradio.com).

Corrections: The lead in Bend It Like Beckham is named Parminder Nagra. Phil and Lil's mom on Rugrats was named Betty. Destiny accidentally says Racialicious when she meant Racebending, but that's a great site, too. The joke about conservatives taking all the rockin' music is from a Patton Oswalt routine. Brady Corbet was in M4!

Relevant Links:
Destiny and Rhea on Pool Party Radio
Sawfan666 on Twitter
Erowid Experience Vaults(drug stories)
Troll 2 popcorn clip
This is Sylvie Vartan.
Best Coast, "No One Like You" (South Park Sessions)
Umberto bandcamp page where you can buy/listen to his album, Prophecy of the Black Widow&
Katrina & The Waves, "Walking on Sunshine"
Death Grips (Soundcloud)
Best Worst Movie trailer
My Little Pony: Lesbianism is Magic (Autostraddle)
On Shipping and Fanboys (Patheticfangirl on Tumblr)
15 Insane Fan Theories (Buzzfeed)
James Franco: A Dude's Take on Girls
One Million Moms be hatin' on gay comic book characters (Jeyradan on Tumblr)
TV Makes Girls Feel Like Crap About Themselves, But Does Wonders for White Boys(Jezebel)
Physicists at Funerals (The Order of the Good Death)
Racebending
Teresa Jusino (Friend of the show) writes about Girls
Todd VanDerWerff shuts down sexist TV Club comments (AV Club)
Guides, Not Gatekeepers Alex's very helpful and informative 'How To Read Comics' guide! (Her Rec List is also solid.)

Fucking Books:
A Short History of Nearly Everything by Bill Bryson
Roger Ebert's Book of Film

Email ThisBlogThis!Share to TwitterShare to FacebookShare to Pinterest
Labels: episode archive, pool party radio, the internet is our boyfriend