This week, the Badland Girls occupy the living room of their dear friend Andrea to talk vampires in pop culture, young adult lit, and Kathryn Bigelow. We also discuss rape culture in comedy, problems with The Hunger Games, and why The Vampire Diaries tv show is so damn good. 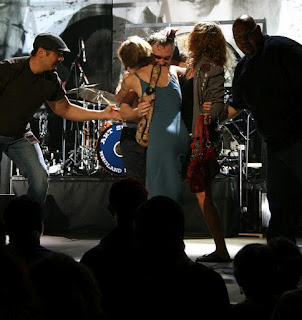 
Spoiler alerts for the following:
The Future
Me and You and Everyone We Know
Innocent Blood
The Hunger Games book trilogy
Twilight (films and books)
Blood and Donuts
The Vampire Diaries
Strange Days
Thriller: A Cruel Picture

Corrections: Feminist Frequency is run by Anita Sarkeesian. Forever Knight wasn't an '80s show, it was a 90's show. Andrea accidentally says Steven Cronenberg when she means David. Blood and Donuts was directed by Holly Gale and came out in 1995. The Golden Compass was directed by Chris Weitz, who also directed New Moon.  I tried to look up the movie Tarantino cited in the rape scene conversation, but the Google results were horrifying and offensive and I never found the movie he was referring to, anyway.