You'll come home for the holidays in a body bag.


It's Thanksgiving, and it's our yearly tradition: watch this trailer. 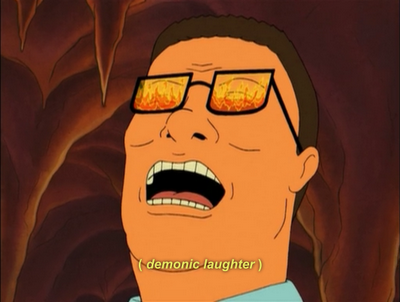 Hello dedicated listeners. Now, I bet you've been wondering where the hell we've been, especially since Destiny said we would make our grand return on lucky ol' 11/11.

Sadly, Rhea (me) had to get surgery two days prior to 11/11, and so she is still recovering from not having an organ (albeit a crappy one) inside her anymore. That coupled with that fact that people keep giving Destiny the runaround for a research project she's working on means that Badland Girls will be on hiatus for the rest of the month. We shall return to your ears on December 2nd.

To help tide you over, Destiny and I decided to share with you some of our current interests and Things of Note, via blog form instead of podcat form.

I've actually been watching a LOT of old WWF videos on youtube, specifically, Piper's Pit. I don't know much about the classic wrestlers of the 80s, so I'm using Rowdy Roddy Piper as my gateway since he's been in movies I like (They Live, Hell Comes To Frogtown). I'm gonna be totally honest: I thought I was WAY too girly to ever enjoy WWF. The last WWF thing I watched (before these videos) was a documentary in a Women's Studies class about how sexist the WWF was (they were referring in the modern incarnation of it that we see today, so, basically, the WWE). I WAS SO WRONG. I have been endlessly entertained by Piper's Pit.


(Not my favorite by far, but THE MAN took down all the Piper's Pits I liked on youtube. Sad day.)

Moving on to my Thing of Note:

This excellent mixtape of some of John Carpenter's soundtrack work brought to you by the podcast Special Features.


Hi, everyone! Here are trailers for the last two movies I watched:


Circumstance: I didn't like this movie because it felt like an after school special, but the acting was great, and I loved seeing a side of Tehran that you don't often see portrayed via Western avenues.


Chungking Express: This movie was a cute pair of romantic stories. I think every nation should give Faye Wong a holiday or put her on a stamp or something.

I've also been enjoying the shit out of the Yo, Is This Racist podcast, on Earwolf, starring Andrew Ti. It's based on his wonderful blog. Funny and insightful!

Other than watching an ungodly amount of movies and listening to podcasts, I've been doing school and the occasional stand-up show. In fact, I have one this Saturday with those darling men of OK Party Comedy on the 24th of November. It's at Studio Gallery!
Posted by Badland Girls at 7:01 PM 2 comments: